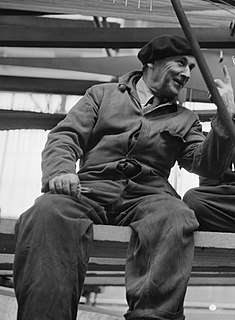 Naum Gabo, born Naum Neemia Pevsner, was an influential sculptor, theorist, and key figure in Russia's post-Revolution avant-garde and the subsequent development of twentieth-century sculpture. His work combined geometric abstraction with a dynamic organization of form in small reliefs and constructions, monumental public sculpture and pioneering kinetic works that assimilated new materials such as nylon, wire, lucite and semi-transparent materials, glass and metal. Responding to the scientific and political revolutions of his age, Gabo led an eventful and peripatetic life, moving to Berlin, Paris, Oslo, Moscow, London, and finally the United States, and within the circles of the major avant-garde movements of the day, including Cubism, Futurism, Constructivism, the Bauhaus, de Stijl and the Abstraction-Création group. Two preoccupations, unique to Gabo, were his interest in representing negative space—"released from any closed volume" or mass—and time. He famously explored the former idea in his Linear Construction works (1942-1971)—used nylon filament to create voids or interior spaces as "concrete" as the elements of solid mass—and the latter in his pioneering work, Kinetic Sculpture (1920), often considered the first kinetic work of art. Read more from Wikipedia →