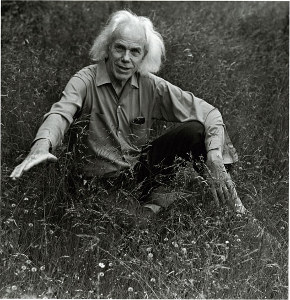 Minor Martin White was an American photographer, theoretician, critic and educator. He combined an intense interest in how people viewed and understood photographs with a personal vision that was guided by a variety of spiritual and intellectual philosophies. Starting in Oregon in 1937 and continuing until he died in 1976, White made thousands of black-and-white and color photographs of landscapes, people and abstract subject matter, created with both technical mastery and a strong visual sense of light and shadow. He taught many classes, workshops and retreats on photography at the California School of Fine Arts, Rochester Institute of Technology, Massachusetts Institute of Technology, other schools, and in his own home. He lived much of his life as a closeted gay man, afraid to express himself publicly for fear of loss of his teaching jobs, and some of his most compelling images are figure studies of men whom he taught or with whom he had relationships. He helped start and for many years was editor of the photography magazine Aperture. After his death in 1976, White was hailed as one of America's greatest photographers. Read more from Wikipedia →