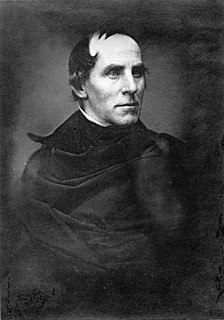 Thomas Cole was an English-born American painter known for his landscape and history paintings. One of the major 19th-century American painters, he is regarded as the founder of the Hudson River School, an American art movement that flourished in the mid-19th century. Cole's work is known for its romantic portrayal of the American wilderness. Read more from Wikipedia →

Works by this artist in other museums: the Smithsonian American Art Museum, the Museum of Modern Art in New York.