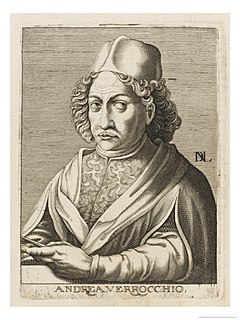 Andrea del Verrocchio, born Andrea di Michele di Francesco de' Cioni, was an Italian painter, sculptor, and goldsmith who was a master of an important workshop in Florence. He apparently became known as Verrocchio after the surname of his master, a goldsmith. Few paintings are attributed to him with certainty, but a number of important painters were trained at his workshop. His pupils included Leonardo da Vinci, Pietro Perugino and Lorenzo di Credi. His greatest importance was as a sculptor and his last work, the Equestrian statue of Bartolomeo Colleoni in Venice, is generally accepted as a masterpiece. Read more from Wikipedia →