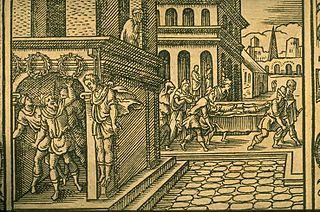 Virgil Solis or Virgilius Solis, a member of a prolific family of artists, was a German draughtsman and printmaker in engraving, etching and woodcut who worked in his native city of Nuremberg. His prints were sold separately or formed the illustrations of books ; many prints signed by him are probably by assistants. After his death his widow married his assistant and continued the workshop into the early seventeenth century. Read more from Wikipedia →