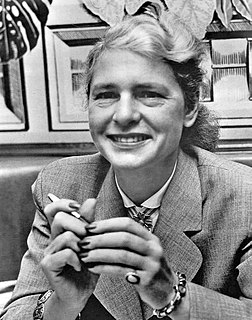 Margaret Bourke-White was an American photographer and documentary photographer. She is best known as the first foreign photographer permitted to take pictures of the Soviet five-year plan, the first American female war photojournalist, and having one of her photographs on the cover of the first issue of Life magazine. She died of Parkinson's disease about eighteen years after developing symptoms. Read more from Wikipedia →