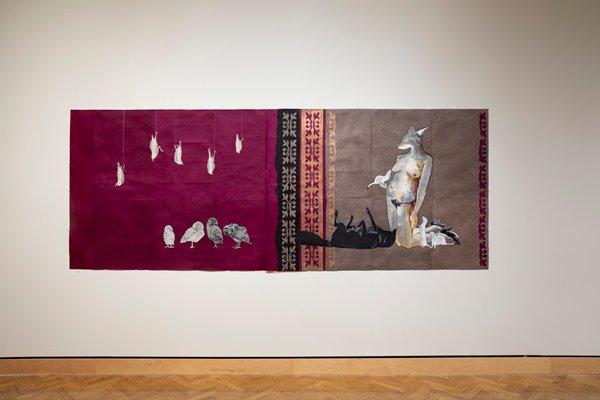 By the mid-1800s, Ponca communities, like all Native nations, were placed under the jurisdiction of the United States Department of the Interior, an agency responsible for managing federal land and natural resources; in effect, they were placed within the realm of the natural world. By the 1870s, Ponca peoples, who were expert farmers, were forcibly removed from their territory in Nebraska and placed on land in Indian Territory (now Oklahoma) that could not sustain them. During this same time, Native people became objects of scientific study. Millions of remains were removed from their burial sites and shipped to laboratories and museums. Living Native people, too, were studied and categorized—placed on governmental rolls, sent to boarding schools, and prohibited from speaking Native languages and practicing Native beliefs. These truths, often erased in history books and not taught to non-Native Americans, are legacies that have had far-reaching consequences for Native people to this day.

To the left, a name appears attached to each crow, the names of four generations of the artist’s family: Buffalohead, Scouts for Buffalo, Four Eyes, and Thankful. The artist (with coyote head), featured on the right along with ermine and a black coyote, faces the crows, a participant in these living memories and truths. Rather than treating individuals as objects for study, Buffalohead shares her family’s names and asks the viewer to reflect upon the full story of American history and the humanity of her lineage and community.

Image: In Copyright–Educational Use. Courtesy of the Artist and Bockley Gallery