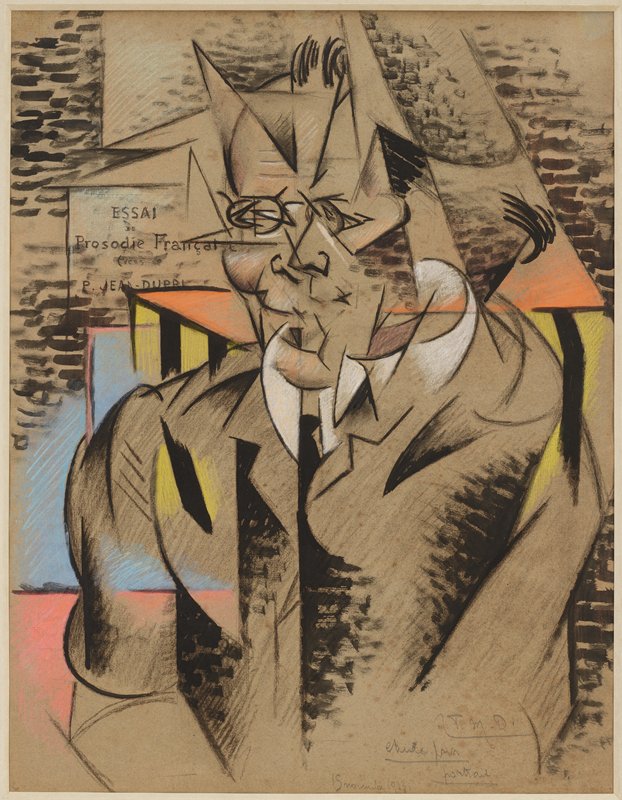 This portrait was made during the feverishly experimental Cubist period that revolutionized the artistic scene in Paris in the years leading up to World War I. Felix Del Marle followed Picasso’s lead in breaking down the subject—fracturing its form—in order to provide the viewer with multiple points of view simultaneously.

Here we see the man’s face straight-on to the left and in profile at the right. Del Marle increases the vibrancy of the image by contrasting the dappled spots with hard-edge forms and flat application of color, partially dissolving the distinction between background and foreground.

The inscription at the upper left—“Essai de Prosodie Française vers P. Jea[n]-Dupr[é]"—leads us to a bit of a mystery. Essai de prosodie française (vers sans rime) appeared in print in 1904, when it was published by the Parisian firm T.J. Plange. This appears to be a widely available publication, but we have found nothing else by the author and no facts about his biography. Perhaps P. Jean-Dupré is a nom de plume. Perhaps this is not the name of Del Marle’s sitter; perhaps the sitter was interested in the publication. An intriguing lead in this mystery points to Max Jacob, a poet and critic who was deeply involved with the Cubist movement—and whose profile resembles the one seen in this portrait.