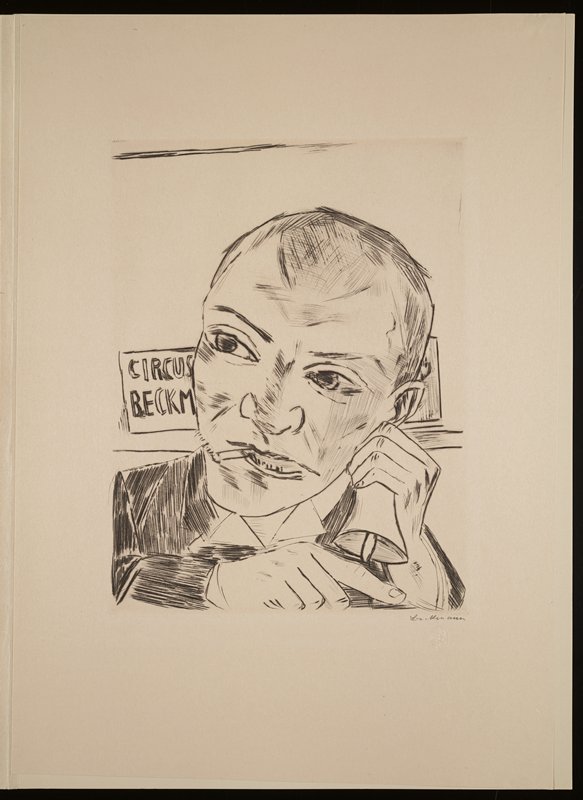 Gift of Alfred and Ingrid Lenz Harrison in celebration of the 100th anniversary of the Minneapolis Institute of Arts 2014.124.1

In "Jahrmarkt" ("Annual Fair"), Max Beckmann imagines the world as a traveling carnival teeming with an eclectic cast of actors, dancers, and circus entertainers who perform in the theater of life. Beckmann casts himself as a carnival barker in the series’ opening plate, ringing a small bell to announce the show, and cajoling viewers to enter the Circus Beckmann, a curious realm of outsiders and misfits. Many of the protagonists are friends and acquaintances of the artist; he even includes his wife Minna in the series, who famously appears along with Beckmann balancing on a tightrope. As the scenes of the portfolio unfold, a pageant of players takes the stage: a tall man, a sharpshooter, a snake charmer, exotic dancers, musicians, and other circus entertainers perform in succession. In one plate from the series, Beckmann presents a carousal crowded with a diverse lot of humanity, an apt metaphor for the apparent aimlessness of life. The series was inspired in part by Beckmann’s visits to the Prater, a Viennese amusement park, where he observed the performers and visitors and sketched them from life. Justly celebrated for its incisive observations on the human condition, "Jahrmarkt" is a brilliant example of Beckmann’s mature graphic style and seminal publication of German Expressionism.

Image: In Copyright. Gift of Alfred and Ingrid Lenz Harrison in celebration of the 100th anniversary of the Minneapolis Institute of Arts