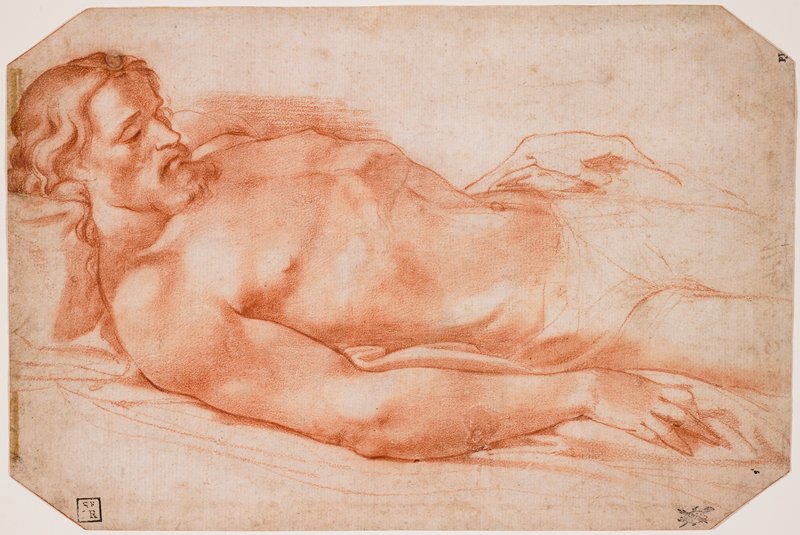 The collectors’ marks scattered around the margins of this double-sided drawing document some of the sheet’s illustrious provenance and provide the guideposts that permitted the detailed reconstruction of its ownership. It belonged to a number of renowned English painters—Peter Lely, Jonathan Richardson, Sir Joshua Reynolds, Sir Thomas Lawrence—as well as William II, King of the NetherlandsThe fortunes of this work rose and fell. For a period it was believed to be an authentic Michelangelo, yet by the 1970s it was sold for $2,500 as a copy.

The studies on both the recto and verso are made after figures from an altarpiece by the Italian Renaissance painter Sebastiano del Piombo, "The Pietà," c. 1513 (Viterbo, formerly S. Francesco, now Museo Civico). Sebastiano’s painting was actually designed by Michelangelo. Michelangelo had befriended young Sebastiano in Rome and helped promote his career, including providing him with a full-scale cartoon (now lost) for the Pietà painting.

The quality of the draftsmanship clearly identifies the studies as copies, and copies after this celebrated Pietà abound, as artists traveled to Viterbo for centuries to study it. Already by 1745, however, if not earlier, the drawing was thought to be by Michelangelo himself, and that attribution persisted, although not entirely confidently, until at least 1850. By 1899, the attribution had changed to Sebastiano, and in 1931, the sheet failed to sell at auction under this name. (The bad economy may have been as much to blame as the misattribution, however.) By the time Alfred Moir acquired the sheet in the late 1970s, it was considered to be a copy, with a number of Michelangelo’s followers subsequently suggested as its author—Daniele da Volterra, Rosso Fiorentino, and Francesco Salviati. The authorship of copies is always difficult to determine, but it seems quite possible that the studies were executed considerably later, perhaps in the early seventeenth century.