Title
Portrait of Countess Maria Theresia Bucquoi, née Parr
Dated
1793
Artist
Elisabeth Louise Vigée-Le Brun
Nationality
French
Artist Life
1755 - 1842
Role
Artist
Gallery
G103
Department
European Art
Dimension
53 1/2 x 39in. (135.9 x 99.1cm)61 1/2 × 47 × 3 1/2 in. (156.21 × 119.38 × 8.89 cm) (outer frame)
Credit
The William Hood Dunwoody Fund
Accession Number
78.7
Medium
Oil on canvas
Country
France
Century
18th century
Provenance
Prince Wenzel Paar, Vienna, Austria;[1] by descent to his relatives, Vienna, Austria. (Wildenstein and Co., New York, New York in 1948); sold to MIA in 1978. [1] The sitter was the daughter of Prince Johann Joseph Paar (1719-1792) and Countess Antonia Esterhazy (1719-1771), and the wife of Count Johann Josef Bucquoi (died 1803). The portrait was commissioned by the sitter's brother, Prince Wenzel Paar, with whose descendants it remained for over a century. Vigee specifically recalls the painting in her Souvenirs when referring to the hospitality accorded to her by her Austrian patrons during her stay in Vienna. Upon its completion, the portrait was displayed in the salon of the palace of Prince Paar, where, as the artist herself recorded, its exceptionally vibrant color scheme would have clashed with the white boiseries of the room. Accordingly, green velvet hangings were improvised to soften the contrast, and Prince Paar himself devised a sort of reflecting candelabra to light the picture.
Rights
Public Domain
Classification 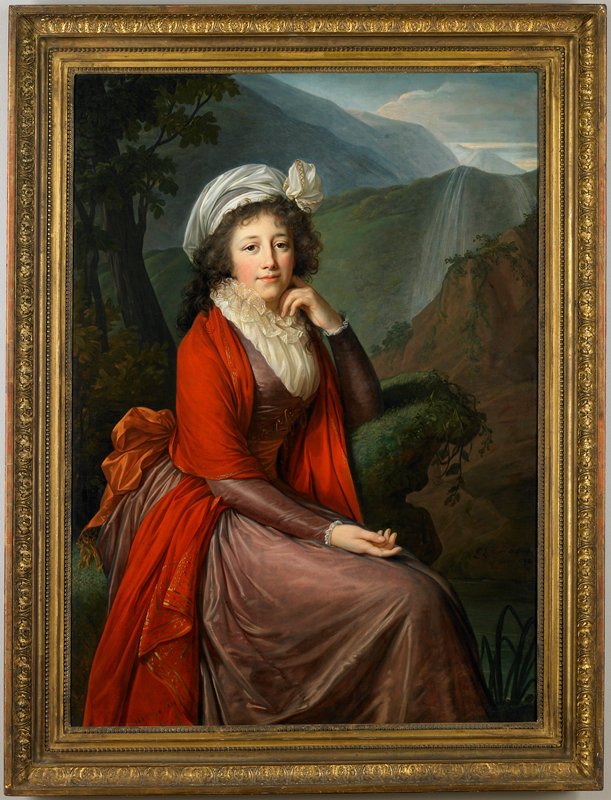