Title
Portrait of Catherine Coustard, Marquise of Castelnau, Wife of Charles-Léonor Aubry with Her Son Léonor
Dated
c. 1700
Artist
Nicolas de Largillière
Nationality
French
Artist Life
1656 - 1746
Role
Artist
Gallery
G308
Department
Paintings
Dimension
53 1/4 x 40 3/4 in. (135.26 x 103.51 cm) (sight)70 1/2 x 58 x 5 in. (179.07 x 147.32 x 12.7 cm) (outer frame)
Credit
The John R. Van Derlip Fund
Accession Number
77.26
Medium
Oil on canvas
Country
France
Century
17th-18th century
Provenance
House of Largillierre in 1699.[1] Madame Charles de Dompierre d'Hornoy, Paris, France, by 1928; by descent to her grandson, Guy de Bouteville, Paris, France. (Galerie Cailleux, Paris, France, in 1977); sold to MIA in 1977. [1] This has been added to clarify confusion regarding the dating of the portrait. Largilliere appears to have begun this portrait in 1699. In a "Statement of goods and effects of Nicolas de Largilliere, customary painter to the King and his Royal Academy of Painting and Sculpture", drawn up at the time of the painter's marriage, August 19, 1699 (National Archives, file X 251) there was due to M. de Largilliere for the portrait of Madame Aubry. On the basis of this inventory, Georges de Lastic thinks the date '170…' which follows the signature should be read 1700. According to information furnished by Georges de Lastic, the Marquis of Castelnau [1673-1728] was the wife of Charles-Léonor Aubry [1667-1735] who was the Marquis of Castelnau, seigneur of Lazenay, Plotard, and other places in Berry. The Marquise of Castelnau was the daughter of Gabriel Coustard, Counsel to the King and Comptroller General of the Legion of Honor. She is depicted here with her eldest son Léonor Aubry, [1695-1770] later the Marquis of Castelnau. Quite wealthy, the Aubrys owned the magnificent estate of Castelnau near Bourges, on which the chateau stands today.
Rights
Public Domain
Classification 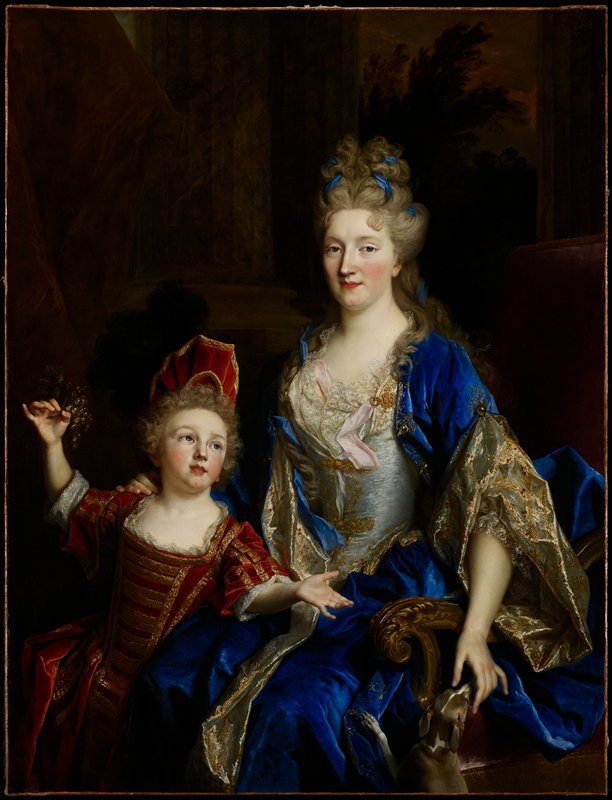