Why the Print and Drawing Fair, at 25, is still a draw

Title
Saint Jerome by the Pollard Willow
Dated
1648
Artist
Rembrandt Harmensz. van Rijn
Nationality
Dutch
Artist Life
1606–1669
Role
Artist
Gallery
Not on View
Department
Prints and Drawings
Dimension
7 x 5 3/16 in. (17.78 x 13.18 cm) (plate)7 1/4 x 5 7/16 in. (18.42 x 13.81 cm) (sheet)
Credit
The John R. Van Derlip Fund
Accession Number
2009.19.3
Medium
Etching and drypoint
Country
Netherlands
Century
17th century
Provenance
Pierre Remy, dated 1749 (died after 1787, Paris, Lugt 2173); Kennedy Galleries (New York, stock no. a14562); Henry Harper Benedict (1844-1935, New York, cf. Lugt 1298 and 2936); sold Sotheby Parke Bernet, New York, May 10, 1973; to C. G. Boerner (Düsseldorf) for a private German collection; by whom consigned to C. G. Boerner (New York), 2008 A speculative note on the early provenance: Rembrandt etchings with Remy's mark and the date 1749 are almost invariably of the very highest quality. This etching may have been part of a renowned group of Rembrandt prints that Remy acquired from painter Jacques Aved. Evidence suggests that, Remy transferred these sheets to London engraver and dealer Thomas Major, who sold it to the financier Sampson Gideon, who in turn probably acted as agent or banker for the artist and dealer Arthur Pond. However, unlike many sheets sharing this early provenance, this one was not sold to Sir Edward Astley, who typically stamped his mark prominently on his Rembrandts. Presumably, Pond sold the present sheet to another collector, after which point there is a long gap in the provenance until its reappearance with Kennedy Galleries. The curator in now attempting to reduce the gap by tracing the print in the Kennedy archive, now believed to be in the possession of another dealer.
Rights
Public Domain
Classification 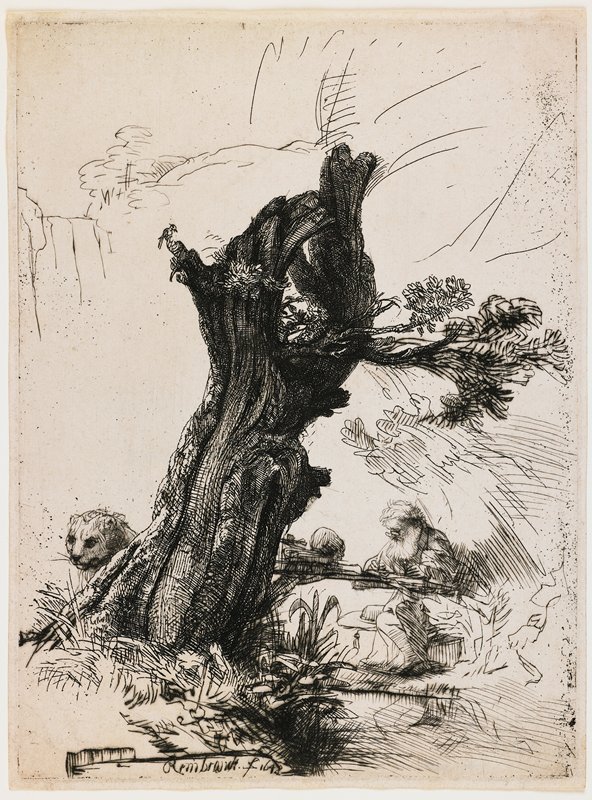